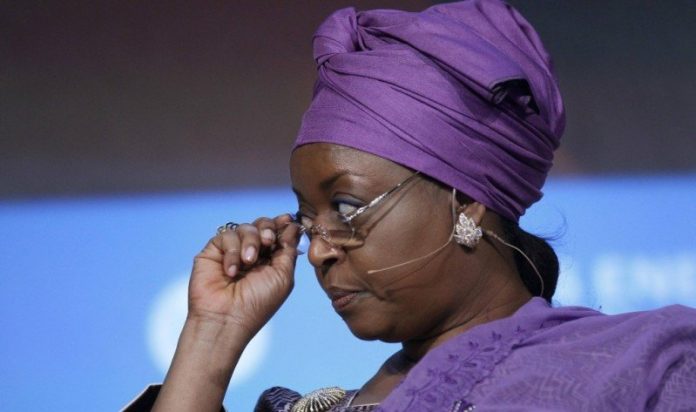 Share this on WhatsApp
Spread the love
Using her lawyer and two others to manage a shell company, former Oil Minister Diezani Allison Madueke acquired $37.5 million property on the Banana Island in Lagos in 2013, but a federal high court in the state has ordered a temporary forfeiture of the properties and rents, following an ex-parte application the EFCC brought against the minister.
The court order forfeiting the property at 3, Block B, Bella Vista, Plot 1, Zone N, Federal Government Layout, Banana Island, Foreshore Estate, was given on Wednesday by Justice Chuka Obiozor.
The ex parte application was brought pursuant to Section 17 of the Advance Fee Fraud and Other Related Offences Act, No. 14, 2006 and Section 44 (2) (k) of the Constitution.
Joined as respondents in the motion are Allison-Madueke, her lawyer and partner Afamefuna Nwokedi, and a company — Rusimpex Ltd.
According to the court processes presented by EFCC counsel Anslem Ozioko, the property comprises 24 apartments, 18 flats and six penthouses.
Apart from the property, the court also ordered a temporary forfeiture of the sums of $2.7 million and N85 million said to be part of rents collected on the property.
Ozioko said the EFCC reasonably suspected that the property was acquired with proceeds of alleged unlawful activities of Mrs. Allison-Madueke.
According to him, the EFCC revealed that Mrs. Allison-Madueke made the payment of $37.5 million in cash for the purchase of the property. The cash was moved straight from her house in Abuja and paid into the seller’s bank account in Abuja.
Mr. Ozioko said the commission was convinced beyond doubts as Mrs. Allison-Madueke was still in public service as the Petroleum Minister when the transaction occurred.
ALSO SEE: Diezani’s cronies, Aluko, Omokore in fresh trouble
In a 41-paragraph affidavit accompanying  the ex parte motion, the commission said Mr. Nwokedi connived with Mrs. Allison-Madueke to purposely incorporate the company — Rusimpex Ltd on Sept. 11, 2013 to perpetrate the alleged fraud.
And during interrogation, Nwokedi explained that he had approached Mrs. Allison-Madueke for opportunities in the oil and gas industry, adding that the ex-minister in the alternative asked if he could manage landed properties, an offer which Nwokedi accepted.
He later registered the company (Rusimpex Ltd) and listed Adetula Ayokunle, and a Russian, Vladmir Jourauleu, as the directors of the company.
According to the commission, when Mr. Ayokunle was interrogated by the EFCC, he explained that he only appended his signature on the documents on his boss’ instruction, while Mr. Jourauleu denied knowledge of the company.
Justice Obiozor adjourned the case to August 7 for any interested party to appear before him and show cause why the orders should not be made absolute.
He also said the order should be published in a national daily.
Share this on WhatsApp