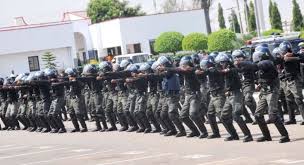 The Inspector General of Police, Mohammed Adamu, has informed that no fewer than 69,282 personnel would be deployed to provide adequate security during the November 16 governorship elections in Kogi and Bayelsa states.

Adamu revealed this recently while reacting to fears of insecurity expressed by the chairman of the Independent National Electoral Commission (INEC) during a meeting of the Inter-Agency Consultative Committee on Election Security organised by the commission held in Abuja.

The IGP quelled rumours that thugs have been mobilised to cause violence during the polls in both states, assuring that the Nigeria Police Force was prepared to provide adequate security during the election process.

He said; “The police as the lead agency for internal security is ready for the election in Bayelsa and Kogi States. We are aware of the security challenges in the two states and we have made adequate provisions in terms of personnel and logistics to tackle any security challenge we might face.

Adamu who said that the security of INEC officials and materials was guaranteed also noted that ward collation centres and polling units would be adequately protected as well as the offices of the Central Bank of Nigeria where the materials would be kept.

Also speaking at the event, the INEC boss Professor Mahmood Yakubu alerted of alleged plots by some politicians to use thugs to disrupt the governorship elections in both states, as well as the Kogi West senatorial district election rerun taking place on the same date.

Yakubu stated that the thugs were being mobilised either to influence or disrupt the November 16 process.

He said, “There are already warning signals in the two states; both are politically volatile. Elections have been disrupted by violence in the past.”

Yakubu said the electoral body had already identified some flashpoints, adding that the thugs were being “mobilised from within and outside the states with the aim of either influencing the elections or disrupting the process on behalf of partisan sponsors.”

He added, “This calls for a robust response before the elections, on election day and during the process of collation and declaration of results.”

Noting that the ICCES meeting was meant to review the security situation in the two states and to look at how best to ensure security to enable the commission to conduct free and fair election, he said, “Doing so means providing security that will guarantee safety of voters; protection of INEC officials, unimpeded movement, including access to polling units and collation centres for election officials.

“These include protection of accredited polling agents, observers and the media; effectively and dispassionately dealing with disruptive behaviour by political actors and persons acting on their behalf. Enforcement of the restriction of movement in both states on election day and the prompt arrest and prosecution of offenders.”