The Lagos State Environmental and Special Offences (Enforcement) Unit Taskforce has said that none of its personnel shot one Mr Bamidele Ajala, a Wema Bank employee, in the Oshodi area of Lagos Mainland.

The Director, Public Affairs of the agency, Abdulraheem Gbadeyan, in a statement he signed on Monday said that the taskforce was accused of the incident in a newspaper publication which also appeared on its online edition.

Gbadeyan stated that the publication carried the story on Monday, Oct. 18, in which the banker allegedly accused the taskforce officials of shooting him.

The Chairman of taskforce, CSP Shola Jejeloye, in the statement expressed displeasure over the publication and said it was necessary to correct the false impression which had been created.

He said that publication was obviously targeted at tarnishing the image and good work the agency was doing, pointing out that there was no iota of truth in the report.

According to him, the Lagos State Taskforce has a schedule of duties, with areas of coverage and time of operations in the state.

“The agency never operated around the area on Tuesday, Oct. 12 as claimed.

“There are several security beats around the area due to the peculiar nature of the area and its proximity to the country’s airport; however, not all the beats are manned by the agency’s officials,’’ he said.

Dismissing the allegations, the chairman noted that not every policeman or security agent on Lagos roads is attached to the taskforce.

According to Jejeloye, his taskforce officials are trained, enlightened and educated enough to know that traffic offences are not a criminal offences.

“Rather than support them while carrying out their legal duty to instill sanity on our roads and curb other environmental vices, some people have resorted to needless media war in order to discourage the agency from carrying out its lawful duties.” he added.

Jejeloye, however, pointed out that such allegations were not new to the agency, especially from environmental and traffic laws offenders who had always used blackmail, intimidation and the media to drive home their fictitious claims against the agency.

“Taskforce officials are led by senior police officers who will not compromise the ethics of their profession and their careers.

“The Lagos State Taskforce has a duty to protect the state from environmental saboteurs and traffic offenders. It is a duty that we must not fail or falter, ” he added.

Jejeloye stated that the agency would not lose focus of its objectives and assignments, targeted at zero tolerance for environmental degradation.

He said that the agency, on its own, would intensify efforts in its internal investigation towards ensuring that whoever was part of the dastardly act “is tracked down and handed over to the appropriate authorities.’’

He urged media outfits to always cross check their facts with the agency to get its own side of the story before publication. 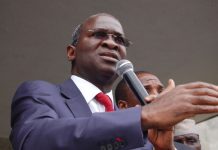