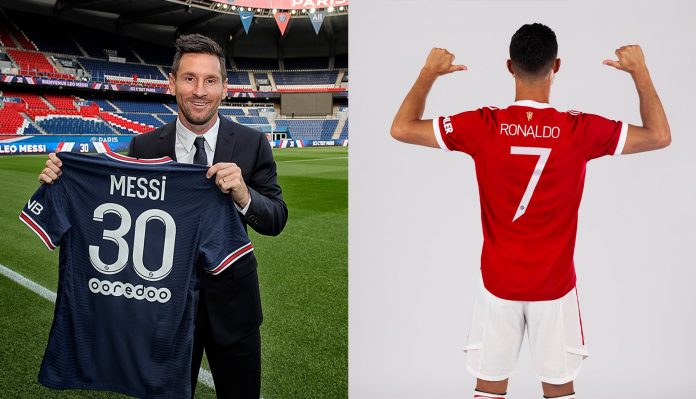 Lionel Messi and Cristiano Ronaldo sent the entire footballing world into a frenzy with their moves to Paris Saint-Germain (PSG) and Manchester United respectively this summer.

In what has been one of the biggest headline-grabbing transfer windows of all-time, Lionel Messi, Barcelona legend with 672 goals in 778 appearances to his name, left the club and joined PSG under some of the most bizarre circumstances in recent memory. The move stirred up a media frenzy as the world watched on, with the Argentine bidding a tearful farewell to Camp Nou after 21 years at the club before being unveiled at the Parc des Princes.

Shortly after their blockbuster transfers were announced, shirt sales skyrocketed with fans desperate to get their hands on Lionel Messi and Cristiano Ronaldo’s new jerseys.

Now, the data has come in with respect to which superstar sold the highest number of jerseys this summer. Cristiano Ronaldo has reportedly sold almost twice as many Manchester United shirts compared to Lionel Messi at PSG.

Earlier, PSG generated a massive income of over £20 million in the first few minutes after signing Lionel Messi. Understandably, the Argentine’s jersey sales have continued to climb and currently stand at a reported £103.8 million.

However, Cristiano Ronaldo’s decision to return to Manchester United has altered the dynamics in terms of jersey sales this summer. The Portuguese forward has generated a revenue of £187.1 million from jersey sales so far, which is almost twice the amount generated by his rival Lionel Messi.

Manchester United also have the no.1 selling home shirt of the season, with 1/4th of the official merchandisers currently sold out or near to selling out. Online searches for the ‘Ronaldo 7’ shirt also increased by 600 per cent, compared to last summer’s data.

Even on the pitch, Cristiano Ronaldo and Lionel Messi ended up scripting new records during the international break. The Manchester United forward became the all-time leading goal scorer in men’s international football with a brace against the Republic of Ireland.

Lionel Messi, on the other hand, netted a sublime hat-trick against Bolivia to surpass Pele as the leading South American goal scorer in men’s international football. Without a shadow of a doubt, both Cristiano Ronaldo and Lionel Messi continue to age like fine wine.