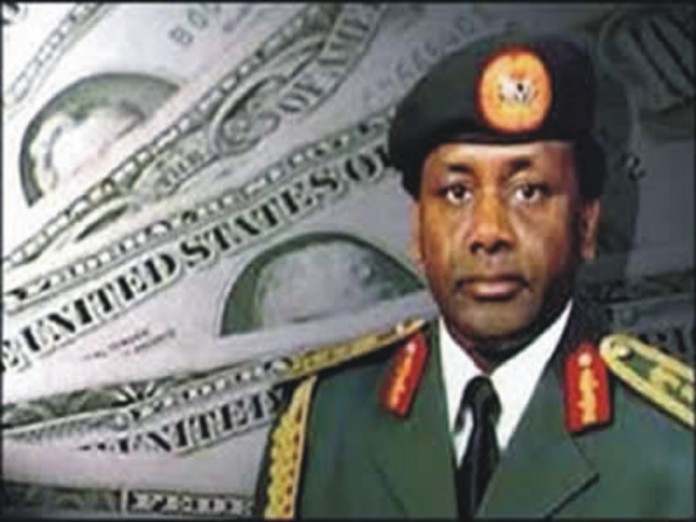 Late Nigerian maximum ruler and dictator, General Sani Abacha is believed to have stolen billions of dollars from Nigeria’s treasury during his military regime that lasted five years 1993 – 1998.

Through subtle diplomacy initiated by democratically elected governments since 1999 some of the late dictator’s loot has been returned to the country.

The Switzerland authorities have returned more than $700 million that the late Abacha hid in Swiss accounts and is now set to return another $380 million stolen by the dictator.

The Government of the Principality of Liechtenstein returned $227million worth of loot stolen by Abacha in 2014.

While the authorities of the State of Jersey in Channels Island is set to return £315 million to Nigeria as part of funds recovered from accounts operated in the jurisdiction by the late Abacha.

The island had earlier returned the sum of £140 million to Nigeria in two batches.

Two days ago the United States has agreed to send back to Nigeria about $480million believed to have been looted by the late Head of State, Gen. Sani Abacha and his family.

The decision was reached after at a meeting between the Department of Justice and the Attorney-General of the Federation, Abubakar Malami (SAN), along with the Acting Chairman of the Economic and Financial Crimes Commission (EFCC), Mr. Ibrahim Magu.

A source in the Ministry of Justice revealed that both parties are finalising the finer points of the agreement as the US is keen that the funds be put to judicious use in Nigeria.

“This is the largest loot ever traced to a former Nigerian public officer in the U.S” said the undisclosed source.

“The DOJ, the AGF and the EFCC have concluded all the talks; we are in the process of repatriation of the $480million.

“Although there are interventions from private lawyers, the DOJ prefers a government-to-government deal.

“I can tell you that the funds will soon be repatriated. If there is anything left, it has to do with the conditions which the US will attach to the utilisation of the funds.

“The US is likely to advise on specific areas to spend the funds on and the project monitoring mechanisms. It does not want the cash re-looted.”

The US Department of Justice had in the last few years initiated forfeiture proceedings against the Abachas, leading to the recovery of over $550million and £95,910 in 10 accounts and six investment portfolios across Europe and America.

The Abacha family are said to be cooperating with the Federal Government even as the EFCC continues the probe of £22.5m (N6.18billion) allegedly stashed away by the late General in the Island of Jersey.

Also, it was revealed that the days of hiding stolen funds in the US may be over with the establishment of a Kleptocracy Unit by the Department of Justice whose job it is to keep tabs on Political Office Holders and other public officers in Nigeria and other countries.