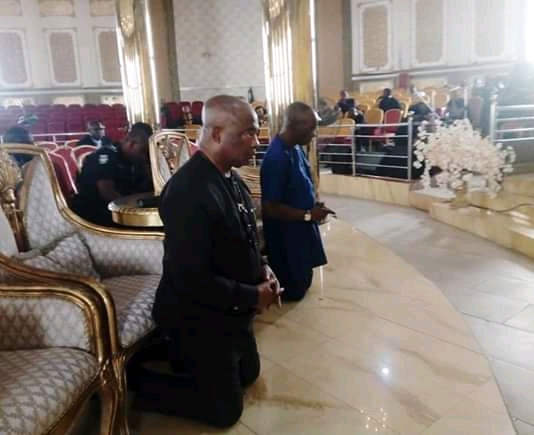 The judgement of the Supreme Court on Wednesday which upheld the nullification of the victory of the David Lyon, the candidate of the All Progressives Congress (APC) in the Bayelsa State governorship election, has sent palpable fear into the ruling party and the court-created Governor of Imo State, Hope Uzodinma, as the judgment on the Imo governorship election hangs on in the apex court.  The Supreme Court judgement on the review suit brought by the APC remarkably cut down the acts of impunity and the preponderant reliance on federal might by APC leaders.

The Supreme Court did not only dismiss the APC suit for lack of merit, the court also sanctioned the party for abusing court processes.

The messages from the judgement on Wednesday precipitated unusual panic in the creative Imo governor compelling him to run to a priest for divine intervention on Wednesday, hours after the Bayelsa State judgement.

Uzodinma pretentiously claimed that he decided to have a stop over at the church on Wednesday afternoon.  He was, however, seen kneeling on the alter, perhaps, receiving divine support from the priest.

The Imo governorship election judgement generated unusual judicial culture in the Supreme Court which generated uproar across the country and in the international community. The suit seeking the review of the judgement is pending in the Supreme Court and attracted the curiosity of foreign interests some of whom volunteered to monitor the review proceedings in Nigeria.

The inconsistencies in the figure adopted by the court to unseat Emeka Ihedioha of the PDP and created Uzodinma as Imo governor are obvious. However, the proceedings have commenced and all stakeholders are watching the Supreme Court.