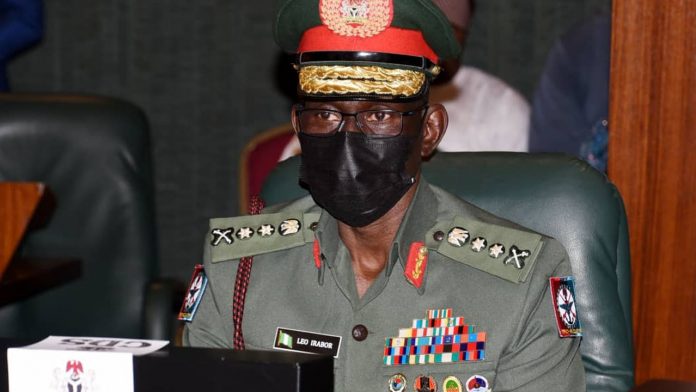 The Chief of Defence staff, General Lucky Irabor has disclosed why telecom blackout will be still be maintained in large swathes of Nigeria’s northwest in the fight against terrorism and banditry.

General Irabor who disclosed this on Thursday in Abuja said the blackout is helping the military crack down on bandits responsible for a wave of abductions and attacks.

All telephone and internet services were shut down in the whole of Zamfara State in early September, and the blackout was later extended to parts of Katsina, Sokoto and Kaduna states as military operations against the bandits intensified.

The closure has made it hard to know what is happening in the affected areas, and has disrupted daily life and business for millions of people.

“Telecommunication in the northwest was shut down out of necessity. We have achieved successes within this period,” Irabor said.

“So the shutdown will remain as long as it’s necessary. The shutdown is more of a blessing than anything else,” he told reporters.

Irabor said the armed forces had killed 250 bandits in the northwest since the blackouts began. He also said more than 600 insurgents had been arrested during the period, without elaborating.

It was not clear whether he was referring to bandits or to Islamist insurgents, who are mostly concentrated in the northeast rather than the northwest.

Meanwhile the acting director of defence media operations, Brigadier General Bernard Onyeuko has given an update on the Operation Hadarin Daji being executed in the North west in the last two weeks.

“The troops of Operation HADARIN DAJI within this period in focus, dominated the operations theatre with aggressive fighting patrols and other kinetic operations with the support of intensive air operations executed by the Air Component.

Some of these operations resulted in the rescue of kidnapped civilians, neutralization of armed bandits, recovery of arms and ammunition as well as arrest of some criminal elements within the period.

“These arrested criminals and items recovered have been handed over to appropriate prosecuting agencies for necessary action. In the course of these operations, troops rescued a total of 4 kidnapped civilians, neutralized 5 armed bandits, arrested 4 bandits’ collaborators and recovered 7 AK-47 rifles and 275 rounds of 7.62mm special ammunition among other items and motorcycles.

“Further, the Air Component of Operation HADARIN DAJI has sustained its offensive air operations against banditry and other criminal elements in the North West Zone.

Bandit gangs who camp in remote forests and travel by motorbike have kidnapped more than 1,100 children from their schools and have also targeted villagers and people travelling by road.

In most cases they have demanded ransoms, and many have been paid although the details are rarely made public.