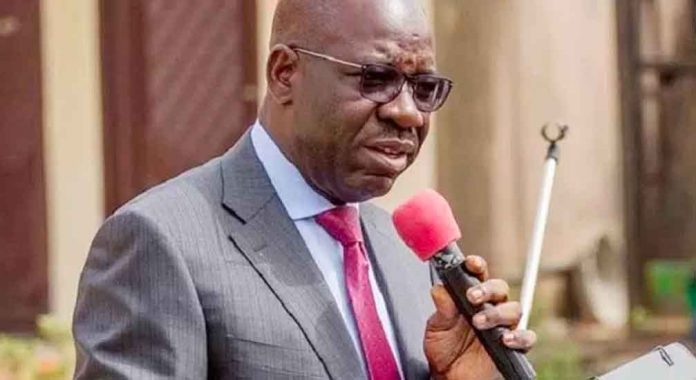 Governor Godwin Obaseki of Edo state is in another eye of the storm as the Edo state chapter of the Nigeria Union of Local Government Employees (NULGE) has accused him of taking over the responsibilities of local governments, as well as ripping them off their funds.

The State President of the union, Mr. Lazarus Adorolo who made the accusation during an interview with the News Agency of Nigeria (NAN) in Benin, disclosed that this abnormally placed the council in a difficult position to effectively discharge its duty to the people at the grassroots level.

According to him, “We cannot impact the lives of the citizens because the State has hijacked our sources of revenue and yet the same State government that comes out to the public that local governments are not living up to their responsibilities.

“It is sad that the Chief Accounting Officer of councils are not taken into account whenever the distribution of the monies that comes to local governments are being shared.

“That is to say that the owners of the money do not have any input as to how the money is shared. That is against the provisions of 162 section 7 of the 1999 constitution.

“The councils do not get the 10 percent of the Internally Generated Revenue (IGR) that the State is supposed to add to what comes from the federation account.

“The councils do not know what even comes from the federation account, we are only given what they feel like given to us at the end of every month.

“At the end of the month, we receive all manners of directive from the office of the governor and his deputy to the effect of deductions from projects that have even been funded by agencies like World Bank and UNICEF.

“As we speak, the councils are owed between five to 16 and half months salaries arrears, including deductions not remitted that all amounts to over N5 billion.”

Meanwhile, the State Commissioner for Local Government and Community Affairs, Mr. Monday Osaigbovbo, denied the allegations and attributed the problem of local government to over staff.

He stressed that the State has practically taken over the responsibilities of the council because they are weak financially.

“Again, the councils are fully involved in the sharing of money from the federation, we do Pre-JAAC here in my office before we meet with the governor for the proper JAAC.