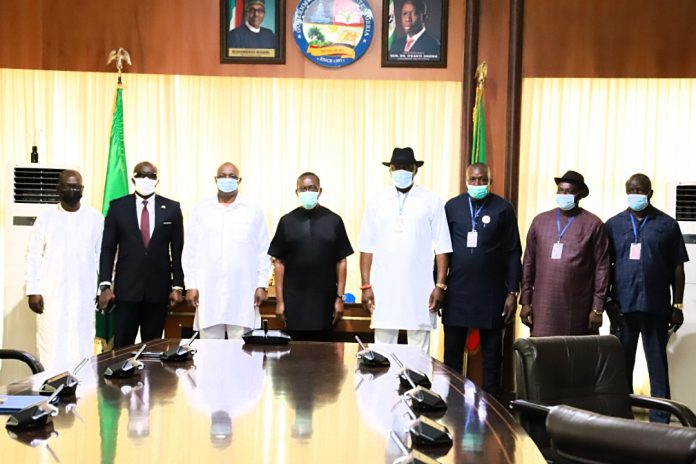 Share this on WhatsApp
Spread the love
Governor Ifeanyi Okowa of Delta State, on Wednesday, advised residents of Warri, Uvwie and environs to avoid erecting structures on water ways so as not to hamper the fight against flooding and desilting of drainage channels in the area.

Okowa, inaugurating Chief Pereotu Oloye as a new member of the Warri, Uvwie and Environs Development Agency (WUEDA) at Government House, Asaba, said the advice had become imperative as it would immensely go a long way in helping to restore the glory of the oil rich city of Warri, Uvwie and environs.

According to him, the inauguration of Chief Oloye was necessitated by the death of Chief Sunny Izonfade who, until his demise, was a member of WUEDA Board.

The governor  said that WUEDA was created to redouble efforts in the upgrade of infrastructure development and beautification of the oil rich city to stimulate the growth of commerce and industrialisation in the area.

While congratulating the new appointee, Chief Pereotu Oloye on his inauguration, he charged the Director General of the Agency and other stakeholders to work as a team in achieving set goals.

“The inauguration of Chief Pereotu Oloye was occasioned by the passing away of one of our very dear own, Mr. Sunny Izonfade who was a member of the Agency.

“My dear brother, as you are inaugurated today, there is a lot of work to be done and l urge you to quickly relate with other members of the Board and to see what impact you are able to make along with them to truly and positively impact on our people.

“Beyond the physical infrastructure that we put in place, there is the need to also educate our people especially as regards cleanliness and the need to keep our environment clean.

“As we even go into the issue of the control of flood, it is important that our people are advised not to build on flood plains, and they should not build on water ways so that we don’t continue to create a problem of flooding going into the future.

“The hygiene of the place should be such that we do not continue to throw garbage into the drains that we have in our various environment. I wish you well in the course of your duties,” he added.

Governor Okowa said both state and federal governments were struggling to meet the developmental needs of the people due to dwindling resources, even as he pledged to continue to do his best in fast-tracking sustainable development in all parts of the state.

“WUEDA was created to give greater impacts in our developmental plans for the Warri, Uvwie and environs not because it is not part of the general development of the state but we thought that the creation of an agency will further strengthen the infrastructure development in that area.

“At the moment, the Agency is supervising the infrastructure work going on within the Warri, Uvwie and environs in terms of flood control which we believe is one of our very major projects in the course of this administration.

“The Agency is also charged with a whole lot of other things in terms of provision of infrastructure and helping to beautify the environment because Warri and Uvwie area is an economic area in the state and it deserves to receive the appropriate infrastructure that can enable businesses to truly thrive.

“There is need for the Agency to work with team spirit that would enable it achieve faster development.

“It is also important that we begin to look into ways to be able to do things to make an impact even at this point in time that we are beginning generally as a country, to run into financial challenges,” the governor said.

He reminded the Agency of the need to aggressively sensitive the people on the importance of not dumping garbage into drainage channels in addition to keeping their environment clean.

Governor Okowa reiterated that the task of restoring the lost glory of Warri was very dear to his administration and sued for the overwhelming support of all.

Responding shortly after his inauguration, Chief Oloye thanked Governor Okowa for finding him worthy to serve and pledged to work in line with the laws guiding the Agency in the performance of his duties.

Chief Oloye, particularly, appealed to the people of Warri, Uvwie and environs to synergise with the Agency in the area of flood control and total beautification of the area.

The inauguration was witnessed by the state Deputy Governor, Deacon Kingsley Otuaro, and other top government functionaries, including the Secretary to the State Government (SSG), Chief Patrick Ukah; the state Head of Service, Reginald Bayoko and the Commissioner for Information, Charles Aniagwu.