Governor Ifeanyi Okowa of Delta State has begun the process of reconstituting the state cabinet dissolved penultimate week. The Delta Governor, accordingly, appointed the former Secretary to the State Government (SSG), Ovie Festus Agas, as the new Chief of Staff of the Government House, Asaba.

The new Chief of Staff, Festus Agas, is strong political instrument  of the PDP in Delta Central Senatorial District.

Agas replaces David Edevbie, who was the former Chief of Staff in the just dissolved State Executive Cabinet.

The new Chief of Staff was also a former Deputy Speaker of the State House of Assembly during the administration of former Governor James Ibori.

Other appointments, according to the state government, would follow soon. 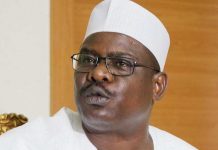