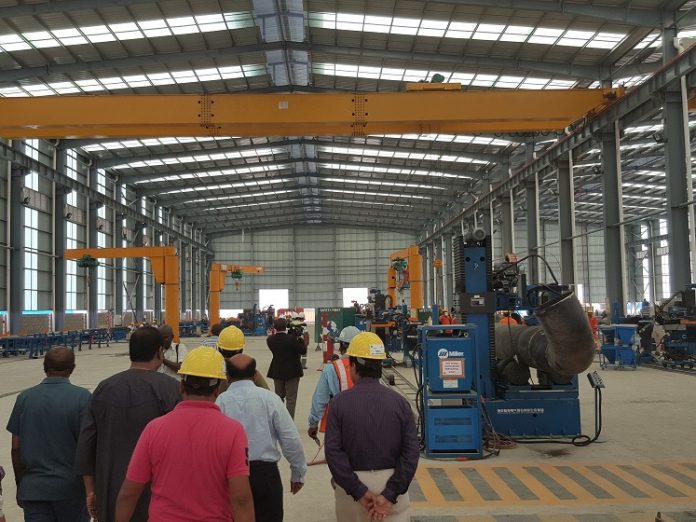 The All Progressives Congress led federal government is desperate to retain power comes 2019, and it is relying heavily on the Dangote refinery to help achieve this.

National Daily gathered that though petroleum subsidy has been removed, pump price is still heavily regulated. The current increase in crude oil prices, foreign exchange depreciation has meant prices should go up.

While the government has tried to put existing refineries in working order, they are simply not worth fixing and some experts have suggested they be sold as scrap.

According to findings by National Daily, government cannot afford to increase the pump price of petroleum products, nor can it foot a direct subsidy. “If the refinery comes on stream by then, it would ensure a stable supply of petroleum products at a reasonable price, providing a key point to campaign with,” a reliable source said.

Siting the refinery at the Lekki Free Trade Zone, means the Dangote group may also have plans to export refined petroleum products. A spike in crude oil prices mean exporting the products may be more profitable than selling within Nigeria, since it would be earning in dollars.

The government may also be reluctant to let pump prices rise in an election year. So while the refinery may provide petrol, it may not be cheaper than current prices.

During a visit to the Dangote petrochemical refinery on Monday, July 31, Minister of State for Petroleum resources, Dr. Ibe Kachikwu urged Alhaji Aliko Dangote and his team to expedite action on the refinery in order to meet its 2019 completion date.

According to Dr. Kachikwu, the federal government is relying heavily on the Dangote refinery to fulfill its promise to Nigerians to end fuel importation by December 2019.

The minister, who said he was overwhelmed by the dimension of the project, explained that the present government had always believed that the private sector holds the ace in industrialization efforts of the government, and noted that the belief has been reinforced by what Dangote Group is doing.

“I have made very firm commitment to Nigerians that I must stop the importation of petroleum products by 2019 and I am going to keep to it.”

In his response to the government’s challenge, Dangote said he has accepted the challenge and would do all possible to achieve the feat.

“We will go back and see what to do to make this happen by fast tracking our processes since the Minister has assured of government’s cooperation and support”.

Earlier in his welcome address, Dangote explained that his group is building the world’s largest single line refinery, Petrochemical Complex, and the world’s second largest Urea Fertiliser plant. The refinery, according to him will have the capacity to refine 650,000 barrels of crude oil per day.

The Petrochemical Plant will produce 780 KTPA Polypropylene, 500 KTPA of Polyethylene, while the Fertiliser project will produce 3.0 million metric tons per annum (mmtpa) of Urea.